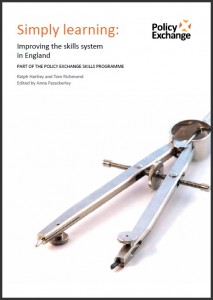 The world of skills, whether it be vocational education, apprenticeships or adult education, has been subject to near constant upheaval for at least 25 years. In recent years the Government has attempted to increase the volume of post compulsory education, improve the status of vocational courses and make the whole system more ‘demand-led’. Yet the skills system in England remains chaotic and unproductive. It is widely agreed that not only is not demand-led, being driven instead by the priorities of the Government, but it is also shockingly complex and wasteful. The purpose of this report was to unpick the problems which beset the skills system in England. We offered recommendations for reform which will simplify the system and make it genuinely responsive to the needs of employers and individuals, whilst incentivising providers to deliver to the hardest to reach learners. As part of this analysis the report looked in detail at Train to Gain, the Government’s funding scheme for employers; apprenticeships; Sector Skills Councils, basic skills; Skills Accounts; and the hardest to reach learners.