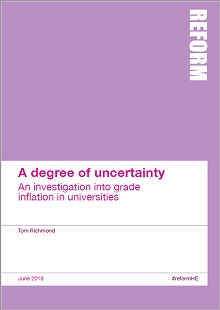 “We are once again experiencing the ‘winds of change’ in the university sector” said Universities Minister Sam Gyimah in February this year, noting that “not a single week goes by without a university story being splashed on the front pages”. Media coverage of rising student debt, Vice-Chancellor remuneration packages, strikes over pensions and debates around freedom of speech have all captured the attention of politicians and the general public. That said, accusations of ‘grade inflation’ in Higher Education (HE) is perhaps the most concerning development because it directly relates to the quality of degree courses in this country.

In the mid-1990s there was no detectable grade inflation at all, with 7 per cent of students awarded a First-class honours (‘First’), yet the upward trend in Firsts over the last two decades has been unrelenting. From 1997 to 2009 the proportion of Firsts almost doubled from 7 to 13 per cent, and in just seven years since 2010 the proportion of Firsts has doubled again from 13 to 26 per cent (climbing from 22 to 26 per cent in the last year alone). 54 institutions have seen their proportion of Firsts double or triple since 2010 and there are now 40 institutions (a quarter of all HE providers) that award Firsts to at least 30 per cent of their students.

The obvious question is what could be causing such a dramatic rise in degree grades? There is considerable evidence to suggest that ‘degree algorithms’ (which translate the marks achieved by students during their degree into a final classification) are contributing to grade inflation. Approximately half of universities have changed their degree algorithms in the last five years “to ensure that they do not disadvantage students in comparison with those in similar institutions”. Research has also identified serious concerns about how these algorithms treat ‘borderline’ cases where a student’s overall mark is close to the boundary of a better degree classification. One expert concluded that “universities are essentially massaging the figures, they are changing the algorithms and putting borderline candidates north of the border”.

Similarly, the pressure being placed on academics by senior managers at universities to lower their standards is also strongly implicated in grade inflation. Some academics have chosen to express their concerns publicly, even though this has on occasion put their own career at risk. One cited the “intolerable pressures on academic staff to pass students who should rightfully fail and to award higher classes of degrees to the undeserving”, while another complained that they had routinely awarded essays low grades “but have been brought under pressure, internally and externally, to provide higher grades.” The sheer volume of similar reports, documented over many years, is concerning and its potential impact on grade inflation is obvious enough.

Regrettably, two decades of uninterrupted grade inflation has resulted in degree grades becoming meaningless. What’s more, existing quality assurance mechanisms such as the Quality Assurance Agency (QAA) and the system of ‘external examiners’ are clearly unable to prevent any inflation. More recent innovations such as the ‘Teaching Excellence Framework’ and the new HE regulator – the Office for Students – are unlikely to fare any better. It is reasonable to assume that leaving the responsibility for ending grade inflation with universities will not have the desired effect. In a world of league tables, competition for students and high tuition fees, HE providers have no obvious incentive to reduce or reverse the seemingly relentless rise in top degree outcomes. A new approach is therefore needed.

This new report recommends that final-year students should sit a new, national assessment for each degree course. The assessments would be designed by professional bodies for degrees such as medicine and law and by learned societies for degrees in the humanities. The results of that assessment would determine the proportions of each degree grade that universities can award in each subject, rather than universities making their own decisions. At the same time, the proportion of Firsts awarded at a national level for each subject would be capped at 10 per cent in order to bring grade inflation to an end.